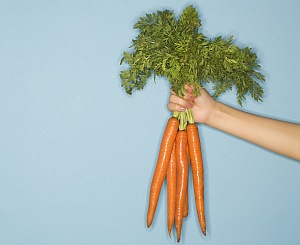 This is the fifth article in a series on 10 Keys to High Performing Teams. This article looks at the “sticks and carrots” approach of traditional performance management systems. The article draws on research from behavioural psychology to show why a culture of recognition is one of the most powerful ways to lift performance, and looks at some of the common mistakes that organisations make.

One of the great things about behavioural psychology is the insight that all behaviour has a cause (or causes) which can be understood. By working on understanding the causes of a behaviour, it becomes possible to then change it.

In other words, people behave the way they are motivated to behave. If you want to to change someone’s behaviour, you just have to understand and then change their motivations.

For example, eating a jam doughnut would (for me) involve a high amount of intrinsic motivation.  It would be very enjoyable and satisfying at the time. But the consequences of eating it lead to negative extrinsic motivators: I will put on weight; I will feel bloated and sick (I don’t do well with gluten); Some people might think less of me, seeing me as weak willed or gluttonous.

Pretty well all traditional performance management systems are built on extrinsic motivation. The hope is that by tweaking the carrots and sticks an employee can be motivated to increase their performance.

Unfortunately, most traditional performance management is based more on unexamined assumptions than on behavioural science. These assumptions, embedded in our culture through our parenting and school systems, focus more on trying to correct unacceptable behaviour than on encouraging and rewarding high performance.

The research is clear on what makes effective consequences to lift performance:

As the example with the doughnut shows, social approval or disapproval can be a powerful behaviour altering consequence. A public, shaming reprimand in front of your peers can have a far bigger impact than a financial penalty. Similarly the impact of a public recognition of good performance is much greater than a quiet pat on the back. Many organisations make the mistake of thinking that it’s all about the money and use the prospect of pay rises and bonuses to encourage performance. However as Daniel Pink has demonstrated in his book Drive financial reward can actually work against the creative problem solving that many businesses crave. And these kinds of financial carrots are not something that can be applied immediately after a behaviour you want to encourage – they are usually in the medium to distant future, lessening their effectiveness as motivators.

But the biggest mistake most organisations make is in concentrating too much on negative consequences at the expense of positive ones.

Aubrey C. Daniels, in his book Bringing out the Best in People talks about the 4:1 rule, which is based on studies which indicate that the there should be at least four positive reinforcements (consequences) for every negative one.  When the ratio falls below 4:1, behaviour tends to default to achieving the minimum performance to avoid negative consequences.  Not all negative reinforcements are consciously intended. Some common ones that that managers may not even be aware of include:

Perhaps the reason that negatives can easily overwhelm the impact of positive reinforcement has to do with the negativity bias of the brain. Rick Hanson and others have written about the fact that our brains are hard-wired to take more notice of threats, problems and trouble than we notice good things. This is explained by the way our brains have evolved over millions of years. As Hanson says:

Imagine being a hominid in Africa a million years ago, living in a small band. To pass on your genes, you’ve got to find food, have sex, and cooperate with others to help the band’s children (particularly yours) to have children of their own: these are big carrots in the Serengeti. Additionally, you’ve got to hide from predators, steer clear of Alpha males and females looking for trouble, and not let other hunter-gatherer bands kill you: these are significant sticks.

But here’s the key difference between carrots and sticks. If you miss out on a carrot today, you’ll have a chance at more carrots tomorrow. But if you fail to avoid a stick today – WHAP! – no more carrots forever. Compared to carrots, sticks usually have more urgency and impact.

The result, says Hanson, is that our brains are like velcro to negatives and like teflon to positives.

Why sticks are ineffective as performance management tools

The problem with relying on sticks as a performance management tool is that as soon as the threat is avoided we relax and no further improvement in performance happens. Signs that this is happening include:

I am indebted to my friend Ian Berry for what he’s taught me about the power of catching people doing things right. Being recognised in a positive way is incredibly powerful. Perhaps its power comes from the fact that so many people feel unseen, unrecognised. Yet to be seen and affirmed is a deep human need, as important as food on the table and a roof over our heads.

A 2013 global study by the Cicero Group found that organisations with high levels of recognition showed employee engagement levels that were twice as high (78%) as organisations with low levels of recognition (34%). This, in turn, has a very significant impact on productivity. A 2012 Gallup survey covering 1.4 million employees found that compared with the bottom 25% of engaged units, the top 25% show:

The reasons are not hard to see why:

A culture of appreciation

The important thing is to make it a culture of appreciation, not just isolated individuals who give encouragement. As Peter Drucker says: “Culture eats strategy for breakfast”. If the culture of an organisation is all about sticks and compliance, this can easily overcome the positive impact of a single manager catching people doing things right. In any case, many managers simply don’t have the time even if they have the personality and inclination to show that level of recognition.  In a culture of appreciation, it is everyone’s job (and joy) to recognise the good work of their peers. Enlightened managers and leaders will make it their job to bring in that culture.

Because the act of positive recognition is itself a behaviour, they can leverage their impact by making a conscious effort to recognise and appreciate acts of peer to peer recognition.