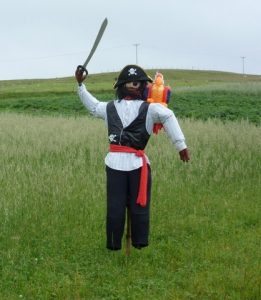 People who love to win arguments love the “straw man” argument technique (also known in the UK as an “Aunt Sally”).

This is how it works:

Instead of arguing with your opponent’s position head on, you construct a false version of their position – the straw man. This looks similar on the surface, but is usually a caricature – a distortion of what they are really saying. It is easy to pick holes in the straw man’s argument and demolish it. Slaying the straw man gives the illusion that you have won the fight.

Politicians love it! Once your eyes are open to this technique you see it everywhere.

I’m sure you can think of your own examples.

A phrase I found helpful years ago was “you can win the argument but lose the person”. This is certainly the case with the straw man technique. The argument can be won at a surface level, but the person won’t be convinced because their true position has not been engaged. However, observers who have not thought deeply about the issues may be swayed – which is probably why politicians are so keen on it.

But in the end, arguing with straw men just causes deeper polarisation and division between people. So much political discourse these days seems to be, in Shakespeare’s words a lot of “sound and fury, signifying nothing”. Surely we can do better.